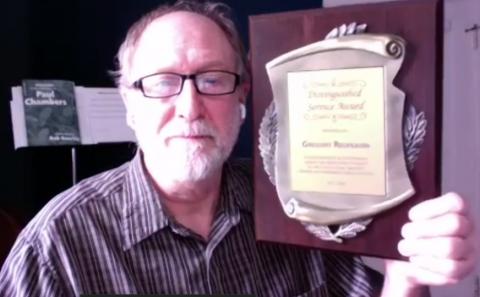 During their February 18, 2021, meeting the CTPF Board of Trustees thanked Trustee Gregory Redfearin for his service and presented him with a Distinguished Service Award.

"Greg has always offered a steady and informed voice on our board, and we will miss his guidance and counsel," said Board of Trustees President and Interim Executive Director Jeffery Blackwell.

Appointed to fill a vacancy in 2017, he brought to the board a legacy of service to his community and fellow teachers whom he served as a Pension Representative. Elected to represent Teachers in November 2017 he served until his retirement from the Board in 2020. He served as CTPF’s Financial Secretary, elected to that position three times, chairing the Committee on Finance and Audit and also served as the chair of the Technology Committee.

Redfeairn announced plans to retire at the end of the 2021 school year.