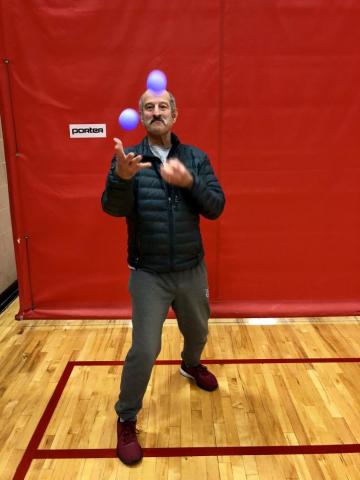 After 24 years of teaching English, English as a Second Language (ESL), and working with the hearing impaired, Barry Rapoport gave up juggling the workload and demands of being a Chicago Public School high school teacher to spend more time juggling (literally). He will juggle with just about any item but is especially interested in perfecting his skill at juggling while solving a Rubik’s Cube.

Most of us are familiar with the colorful Rubik’s cube, a puzzle covered with multicolored squares which players twist and turn until all squares on a face are of the same color. Deceptively simple, less than 5.8% of the world’s population can solve the puzzle. Remarkably, some jugglers try to simultaneously solve three Rubik’s cubes while actively juggling. A young boy holds the Guinness World Record for the feat, and Rapoport is determined to achieve or beat the world record. He is particularly excited about new cube technology which allows for faster movement on what is referred to as a Speed Cube or Speed Square.

Rapoport learned to juggle at a young age from watching his brother. He has enjoyed the hobby throughout the years and, as a first-time dad, he used his daughter’s nap time  to perfect his craft and continued experimenting with new items to juggle. He became an active member of the International Jugglers’ Association (IJA) (www.juggle.org). He enjoys helping the organization educate and provide assistance to fellow jugglers, and frequently attends conventions and festivals. His involvement in the IJA sparked his interest in juggling while solving a Rubik’s cube.

When Rapoport isn’t mastering his craft, he may be found practicing yoga, spending time with his dog, and traveling -- but his passion is juggling. He suggests that the hobby is comprised of wonderful people who are welcoming, inclusive, open-minded, and have a good sense of humor. He believes that the activity keeps his mind sharp, his body healthy, and most of all “opens doors