Community Pitches in to Provide Supplies for All Students

The school year is quickly approaching. CPS Newton Bateman Elementary School (Bateman) is trying to help their students be prepared for whatever this school year may bring by providing free school supplies for all 1,008 prekindergarten – 8th grade students. In a recent email Principal Georgia Davos-Vetas and Assistant Principal Kate Klopper informed families.

“We are writing to you today from a lens of empathy and support. Parents, we know you have been juggling a tremendous amount - even more so than normal - and many families have been impacted financially throughout the past several months. With so many unknowns about the upcoming year, we would like to take one potential area of stress off of your plates.

For the upcoming school year, whether we are teaching and learning together in person or remotely, you will not need to purchase any new school supplies. All supplies will be purchased through the school so that there is no concern about cross contamination of supplies and your family will remain safe by not going to a store to buy supplies.

The webinar is now available for on-demand viewing.

The Board approved the exit from the redemption queue for UBS Trumbull Property Fund, and elected to participate in the 25% Fee Discount program.

CTPF will also invest $30 million to Newport Capital Fund III, a disabled veteran-owned manager. This is a follow-up investment to the Newport fund series and reinvestment in a Minority, Women, Disadvantaged-Owned business Enterprise (MWDBE) manager.

This fall, CTPF is scheduled to hold an election for two Teacher Trustees who will serve three-year terms from November 2020 - November 2023.  At their August 20, 2020, meeting, the CTPF Board of Trustees voted to change their Election Policy for fall of 2020 to facilitate the collection of nominating signatures and the distribution of voting credentials by mail.

CTPF Trustees to Consider Election Changes Due to Pandemic

Now that the Board of Education and charter schools have implemented remote learning for the fall, the CTPF Board of Trustees Election Committee met to discuss options for facilitating the collection of nominating signatures and distribution of voting credentials. During their August 6, 2020, meeting, the Committee recommended that the full Board of Trustees consider two changes to the upcoming election:

A preliminary financial update at the close of the Fund's fiscal year, June 30, 2020.

Legislation passed in 2016 and 2017 reestablished a dedicated tax levy for CTPF, reformed the Illinois education funding formula, established the State’s obligation to fund the normal cost of Chicago’s teacher pensions, and provided funding to offset the cost of retiree health insurance.

This landmark legislation initiated the correction of decades of revenue loss, and set CTPF on a solid path of diverse, stable, and equitable funding, ensuring that Chicago’s educators can retire with dignity and security.

"The 2020 Economic Impact Statement quantifies the economic affect that CTPF has on the State of Illinois and the City of Chicago. Our retirees advance the financial health of the communities across the State of Illinois," said Jeffery Blackwell, President, CTPF Board of Trustees. "Our members with guaranteed income continue to spend, even during recessionary times. They have a profound and positive impact by helping to keep workers in their jobs, momentum in the local and greater economy, and providing much needed financial support especially during this unprecedented economic situation." 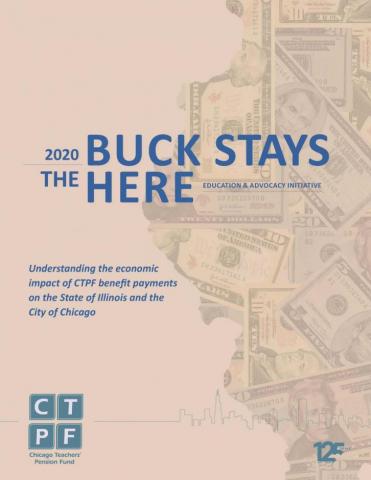 Guard your Medicare card like it’s a credit card.

CTPF is committed to doing our part to stop the spread of COVID-19. For the health, safety, and wellbeing of all CTPF Members, the Fund continues to deliver all member services remotely. The physical office remains closed to all but essential employees whose duties cannot be performed offsite. In-person services and counseling have been suspended until it is safe to resume these operations.

CTPF has implemented the following changes for the health and safety of all:

Delays may impact delivery of checks and pharmacy orders

CTPF has received several reports of delayed mail from the United States Postal Service throughout the Chicagoland area. These delays may have impacted the delivery of pension checks and mail-order medications for members.

Robin Henry graduated from University of Illinois at Urbana-Champaign with a degree in Rhetoric and Advertising. She was recruited for Teachers for Chicago and spent the next chapter of her career in CPS schools, first as a high school English teacher and then as a curriculum coordinator. She said good-bye to CPS and retired on her birthday in 2018 and returned to Advertising the very next day.

From the very first day of retirement, she said “I embraced all of the gifts I have been given and wanted to share them with the world.” She had an advertising consulting project set-up with a firm in Washington, D.C., but within six months of taking on that job, Robin wanted to do more. As a curriculum coordinator she had to plan for what kids needed for college and countless students came to her for guidance. Before one opportunity ended, the other began. Robin had connected with a friend who was the Co-Founder of The Black is Gold Organization and she quickly became a regular volunteer and mentor to young girls.

The Black is Gold Organization is a not-for-profit peer-mentoring group for young Black women throughout the United States in high school, and college. Its purpose is to empower young women and girls, through a multitude of outlets: preparing them for college and their careers, serving the community, and building sisterhood. Robin serves as a college mentor. She hosts a weekly class and a monthly seminar to help high school girls navigate the complex college planning and application process.

Public participation will be available at the beginning of the meeting. The agenda is available through the BoardDocs meeting system. Information is posted in accordance with the Open Meetings Act.

Public participation will be available at the beginning of the meeting. The agenda is available through the BoardDocs meeting system. Information is posted in accordance with the Open Meetings Act.

Randall Postiglione is driven by an old Albert Einstein quote that was more recently adopted by Will Smith: “If you’re not making someone’s life better, then you’re just wasting your time.” He is a former chef, CPS teacher, college math teacher, taught math for the trades at US Steel, and is now a self-described ‘math teacher at-large’ who works ‘on assignment.’

Before his teaching career began, Randall was a chef for Marriott Corporation and owned a restaurant. He entered the Teacher for Chicago Program in 1999 and began teaching shortly after.  He was asked to teach mathematics when he was really more prepared to teach graphic arts. But alas, being a glass is half-full kind of guy; he adapted and brought his innate creativity and positivity to the classrooms in an effort to make a difference in a student’s life.

Fast-forward to 2020, Randall can still be found in a classroom working on short-term assignments. He finds these opportunities through his vast network of teaching colleagues, on websites, and even through former students. He teaches because he “loves to share knowledge, enjoys the challenge of getting kids to learn, and is fulfilled when he sees the confidence on a student’s face when they master a skill.”

5:26 p.m. the meeting has come out of Executive Session and adjourned.

The CTPF Board of Trustees is holding a Personnel Committee meeting, today, July 9, 2020, at 1:00 p.m. Due to the COVID-19 emergency, and in accordance with the temporary changes to the Open Meetings Act, this meeting is being conducted via audio/video conferencing.

CTPF will be closed on Friday, July 3, 2020, in observance of the Independence Day holiday. Operations will resume at 8:00 a.m. on Monday, July 6, 2020. The legal holiday is celebrated on Friday when it falls on a Saturday.

CTPF office staff are working remotely during the pandemic. Members with questions can leave a message at 312.641.4464 or email memberservices@ctpf.org, clearly stating your name and the nature of your inquiry. Calls and email will be returned when business resumes. Find more information on the COVID-19 information page.

CTPF wishes all members a happy and safe July 4 weekend.